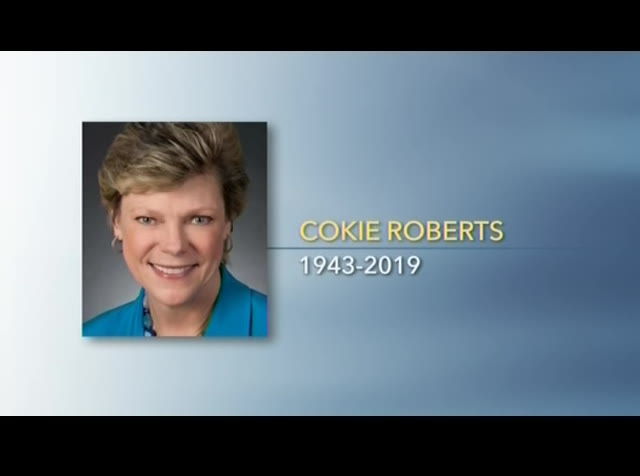 >> abc news has announced the death of their longtime roberts.dent, cokie she died today in washington, d.c., of implications from breast cancer. 75 years old. earlier this year, cokie roberts, along with her a reception ke at commemorating the 100th anniversary of the house of representatives passing the 19th amendment to the u.s. constitution which guaranteed women the right to vote. ms. roberts: what a true honor it is to be from this hallowed in front of the room named for my mother and rebecca's and with the speaker of the house and all of you
1:50 pm 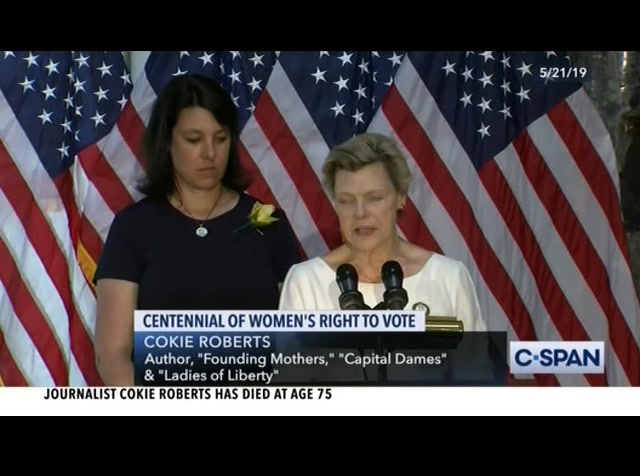 powerful women and leader mccarthy. [laughter] it really is a -- an occasion worth celebrating and celebrating well into next year. until august. 304-89. 19 republicans, largely from the south, comprised opposition. the surprise vote was nicholas ongworth, who had voted the year before the amendment come one e house and passed by vote and has been terrifying for the supporters. e didn't mention -- who probably wouldn't let him come over.
1:51 pm 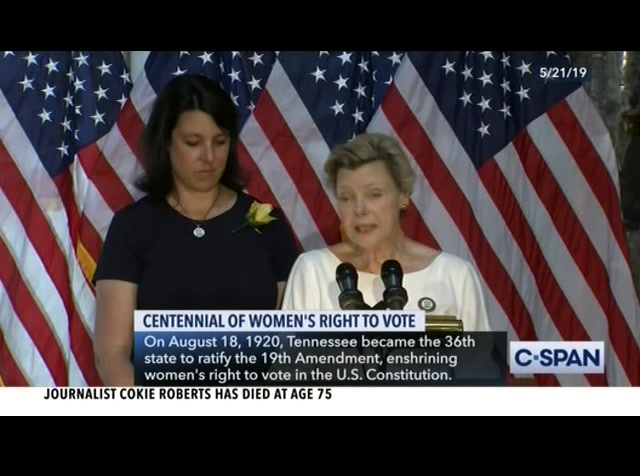 after that heartbreaking vote in heartbreakingas a one in the senate. house speaker he in 1918, the democratic leader in 1919, the two of you can to this switching around -- he said, when i first the voice of ss, the suffragist was like john the baptist crying in the wilderness. it was more a joke than anything else. is what idn't say change him. his own wife had wanted to see what horrible conditions suffragist en the were imprisoned for the crime of the -- the crime of blocking the sidewalk. because they had the at the atter to picket the white house. they were locked up some for
1:52 pm 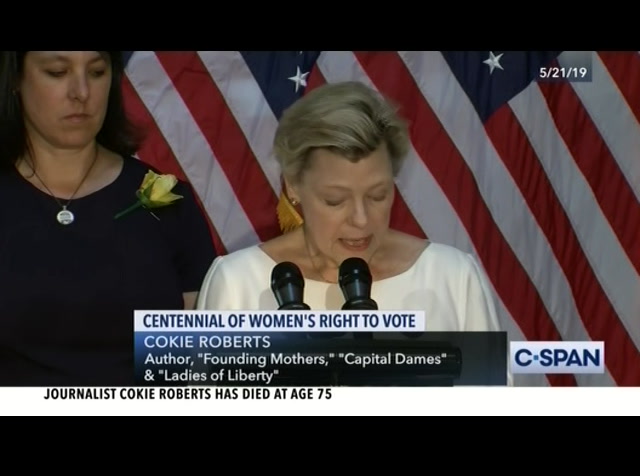 days. they were locked up. some for days, some for weeks, some for months. they were locked up. essentially tortured. force fed when they went on hunger strikes to protest. it had the effect of making the men in congress at least somewhat uncomfortable. that plus active organization at the grassroots, relentless lobbies, shrewd public relations, all combined to bring the voice os the suffragists out of the wilderness. that, plus active organization at the grassroots, mass meetings, relentless lobbying, shrewd public relations, that all combined, to bring the voices of the suffragists out of the wilderness and into full citizenship. none of that is in the newspaper stories. the cheering of the women in the galeries is, and the statements of satisfaction by the women running the rival suffrage organizations. this time, after may 21, 1919, passage in the senate seems secure after the loss of the year before. the philadelphia enquirer quoted the argument of mr. little of kansas that women were working in the war effort, of course, that made a big difference. he said, "they were forced to
1:53 pm 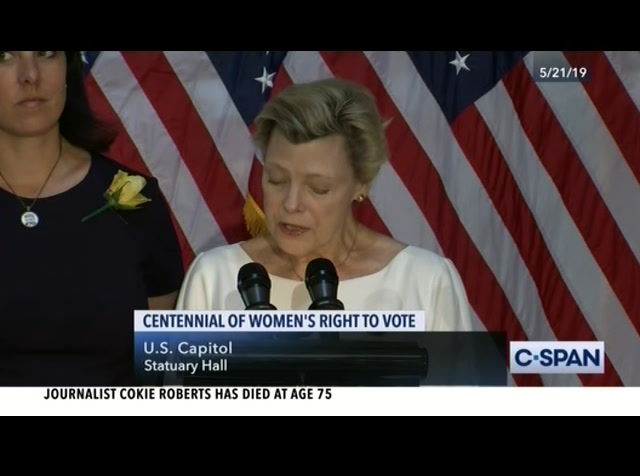 to their own livelihood due complex demands of a complex civilization." and, he said, "women already had the vote in his state of kansas," and "no homes have been distracted due to political disagreement." [laughter] probably not true today. the amendment was passed, of course, with the votes of men only. the year before, jeanette rankin had been on the floor to vote, and someone put flowers at her place. she opened the debate for the amendment, but she lost in her bid for the senate in the next election. so as i look around today and see these powerful women, and i think how things would have been different if they had been here, speaker pelosi would have rounded up the votes, no problem. senator mikulski would have even found a way to slip some federal money to the suffrage organizations. [laughter]
1:54 pm 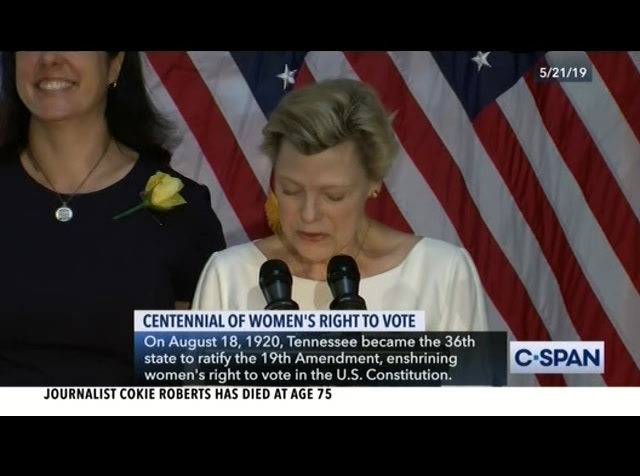 congresswoman lawrence and lesko continue in the tradition of the women who wanted the vote. they did not just want the vote for themselves, they wanted to vote for an agenda, as senator mikulski said. they wanted the vote because they wanted to stop child labor, they wanted to institute maternity clinics, they wanted to do a whole host of social welfare things that they had been working on, women had been working on since the beginning of the republic, but they needed the vote to have the clout to be able to do those things. that is what the congressional caucus on women's issues continues to do in a bipartisan way. we just need more of you, so please, keep convincing women to win.nd so, it's important to be celebrating these stories today, because it is important to know them and for the next generation to know them. my own next generation has taken on the task of telling them in a book she has written about suffragists in washington.
1:55 pm 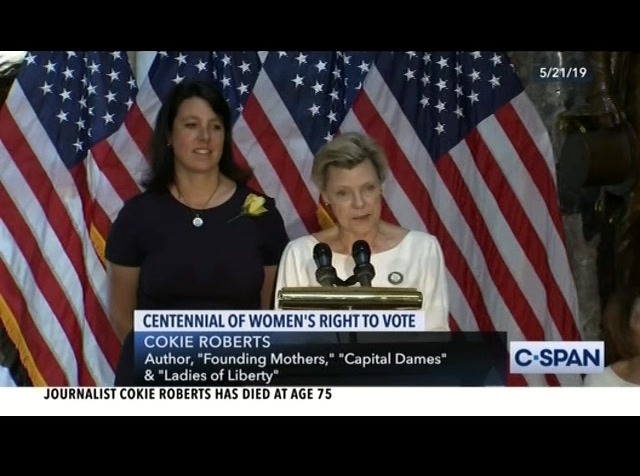 so, i proudly present rebecca boggs roberts. [applause] ms. roberts: as both mom and speaker pelosi mentioned, we're lindy boggse by the in the only room in the capitol named after a woman. my grandmother was born in 1916 before women won the right to vote, and yet became member of congress, an ambassador, a formidable force in american politics. this history is really recent. it is important to know -- people keep saying, women's history is a role model for girls, ok, that's fine, but the main reason to know it is because if you do not learn about women's history, you are getting history wrong. [applause] ms. roberts: and the reason to know about this movement in women's history is that they won.
1:56 pm 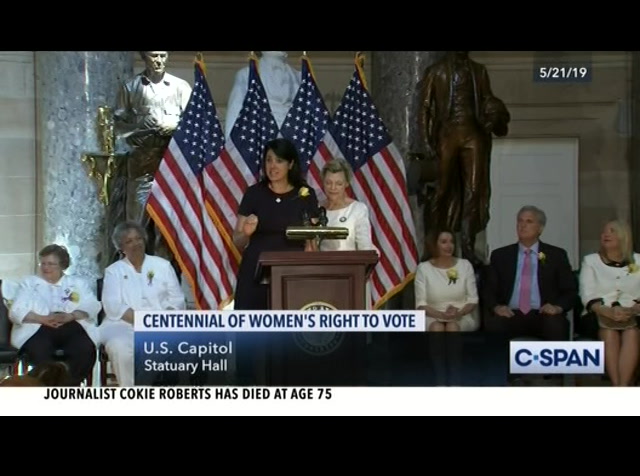 they were incredibly successful activists. they changed the world, and they did it entirely by women and for women. so if you all want to change the world, and i really hope you all do, then there are worse role models than the suffragists. they were incredibly successful. so learn the history, vote, and then go out and change the world. thank you. [applause] > cokie roberts was a congressional reporter and analyst who coanchored the political show "this week" with sam donaldson from 2002.o she was diagnosed with breast cancer in 2002 and died today of complications. is survived by her husband of 53 years, steven, and their children.
1:57 pm 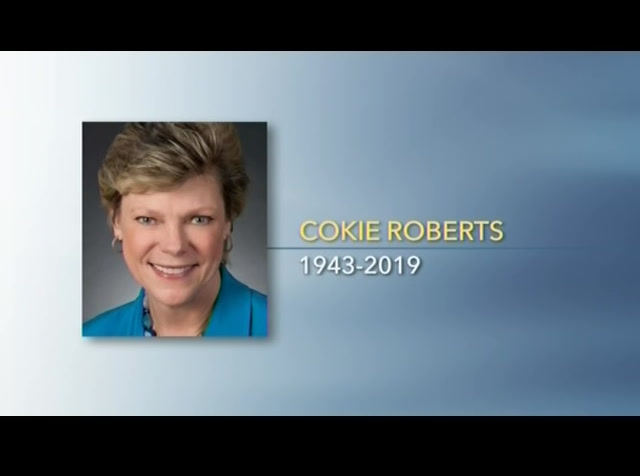 in the house judiciary meeting from president rump's former advisor, lewandowski. "politico" congress reporter house -- the white house had directed mr. lewandowski not to discuss the ubstance of any conversations he had with the president or senior presidential advisors official government matters. the judiciary committee demmeings member tweeted this -- demings tweeted this -- watch the hearing live under way now on c-span3. house will gavel back in today in just a few
1:58 pm 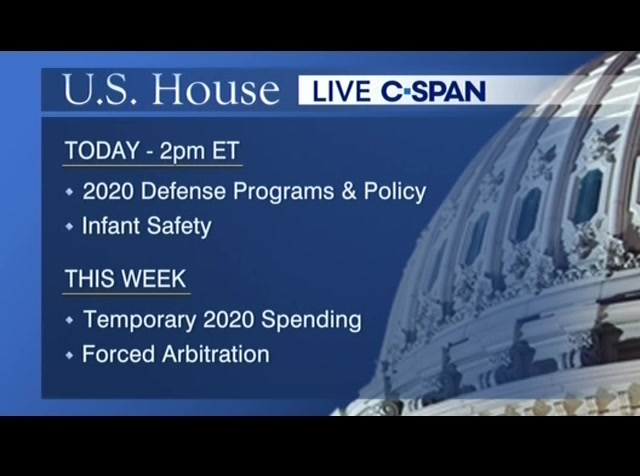 minutes to begin legislative work. agenda, a motion to start negotiations with the senate over defense department programs policy for next year. also, bills dealing with infant safety. week, the house is expected to vote on temporary federal spending while lawmakers continue negotiations over spending for the full year. lso, a bill blocking forced arbitration. you can watch live house coverage in just a moment here on c-span. lady ent trump and first melania trump will host the second state dinner of his dministration as he welcomes australian prime minister scott morrison and his wife, jenny morrison. and dinner arrivals toasts on -- our live coverage 6:30 p.m. day at eastern on c-span, online at c-span.org, or listen on the free c-span radio app. >> the student cam experience valuable to eally
1:59 pm 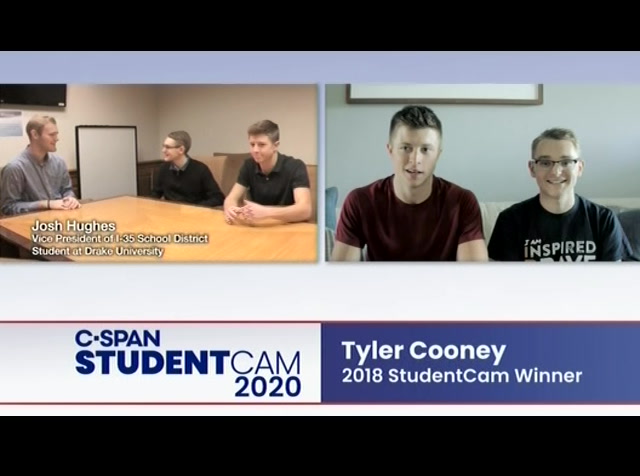 me. >> it had a huge affect on our helped upt has really gross as people going into our college years. >> for past winners of our video documentary competition, the experience sparked their interest in production. >> yes, i currently attend drake university and that's in des moines, iowa. that, i get to be right in front of the caucus season and i got to meet so many different candidates. c-span, i've had the experience in the equipment, to be able to actually film some of them. middle school and high school students to have the documentary, what issue do want presidential candidates to address during the campaign? video and reflect differing points of view. $100,000 in total cash prizes including a $5,000 grand prize. >> be passionate what you're discussing to express your view
2:00 pm 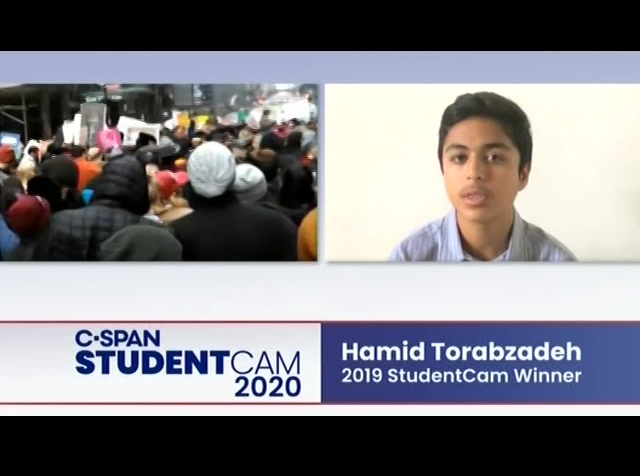 no matter how large or small you think the audience will receive it to be. know that in the greatest country on the history of the matter.our view does >> for more information to help to our started go website, studentcam.org. and the house gavelling in. six bills on the schedule today. the speaker pro tempore: the house will be in order. the prayer will be offered bethe -- by the guest chaplain, brother peter tabichi, keriko mixed secondary school in pwani illage, kenya. the chaplain: in the name of the father, the son and the holy spirit. amen. lord, make me an instrument of your peace. where there is hatred, let me sow love. where there's injury, pardon. where t's
left
right
Borrow Program
tv

Journalist Cokie Roberts, along with her daughter, gave remarks this past May at a reception commemorating the 100th anniversary of the House of Representatives passing the 19th Amendment to the U.S. Constitution, which guaranteed women the right to vote.

Sponsor: U.S. Capitol | Office of the Speaker of the House