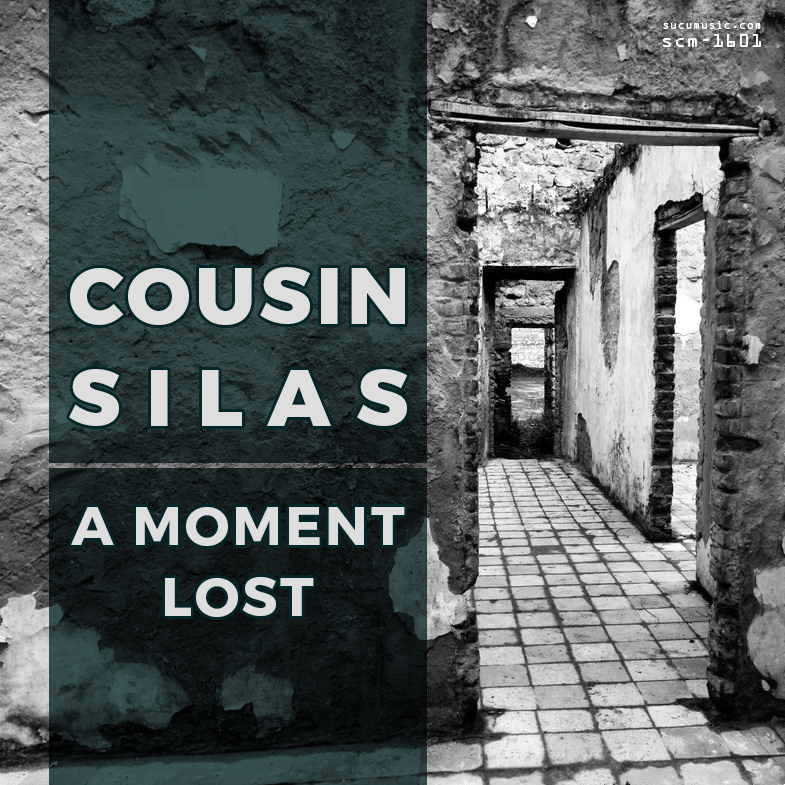 Sucu Music’s 2016 begins with the third release by Cousin Silas, whose trademark guitar-laden form of ambient and soundscapes is here to delight our ears and souls alike. The overall tone of “A Moment Lost” – this is the title of the new album – is less somber than in the previous works, and, apart from the closing track, the not-too-long playing time of the tracks allows the listener to sort of breathe between one aerial trip and another.
The album opens with the title track. Peaceful guitar notes, reminiscent of Fripp’s old frippertronic constructions are laid one upon the other, like waves rolling and gently cresting on a soundscape sea that invites to sail and let oneself be carried adrift by this smooth current of sounds that finally fade out and away, thus suggesting that this journey, meant here as an intro to the work, in fact could last forever, well beyond any pillars marking the ends of the world.
The second track is called ‘Evening Settles’ and, as the title suggests the atmosphere her could be referred to as vespertine. Just imagine you’re sitting on the top of a tor, the last purplish halo of the setting sun splashing the evening sky, and as you gaze in the distance time stops and space loses any specific features. Slow guitar notes direct your eyes, this way and that, and the far fiery arc of a shooting star. Everything is calm and peace, not a leaf stirs, there is time to breathe and enjoy this moment of passage between day and night.
‘Returning’ is the third, very minimal, track on the programme. Sparse piano notes, scattered on a gentle background of whispering voices, are counterpointed by distant guitar notes and chords. A very spacey track where each musical statement takes its time to come into being, all the better to let the piano and the guitar exchange their points of view.
In ‘Lights from the Far Valley’ the pastoral mood of this album continues and takes on a sort of all-encompassing form. Strings sounds in the background dictate a theme which serves as a foundation for even sparser piano intermissions, until the guitar makes its point with Silas’s trademark long, somewhat frippesque notes that add further dimensions to this already multi-dimensional kaleidoscope of quiet, gentle sounds.
‘Anchor Point’ opens with guitar arpeggios upon which different phrasings are added and looped, thus creating a swirl of repeating sounds that reverberate through canyons and boundless expanses of land. All this looping creates architectures that float in the air or hover over the water, sunlit and bright. Themes follow one upon the other and sounds come and go until the farthest, maybe unreachable, horizon.
Again a dusky mood in ‘Afternoon Leave’, where the guitar underlines the ending of the day while saluting the coming of the approaching night. Minor chords and spacey melodies as all lights are turned off, fires extinguished, and smoke billows out of chimney pots.
The work closes with ‘Sea Grass’, a 23 minutes’ opus magnum that starts in the most subdued of ways. Solitary, distant, slow guitar notes, and silence in between them. Chords tip-toe in, adding substance and dimension to this ethereal world the track evokes, a nightly world of sentient oceans and sounds that ricochet slowly from pole to pole. Then it is time to fly again, to let everything fade away in the gentlest way. Only the essential sounds remain and accompany the listener to the end of this extremely laid back and extremely enjoyable work that is Cousin Silas’s ‘A Moment Lost’.
- Tony Colina