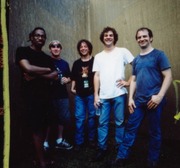 Shows on this day in Ween History They actively encourage audience taping and allow video taping, but their soundman is very against board patches. Apparently they are not too good about informing venues of their pro-taping policy, so good luck getting your equipment past the door. Ween has a pretty big following of tape traders & a substantial web presence in MP3 trading. This comes mainly from their direct involvement in releasing outtakes on the web as well as allowing taping at shows.

On December 26, 2005 fan David Barfield asked Greg Frey, manager of Ween, if they would be ok with the Live Music Archive project:

"do you think that the weens would approve of audience recordings being available via the archive? if so, and this is not already in the works, ping me back and let's get it going!"

Thanks for getting in touch. Ween freely allows the taping and trading of audience tapes. So, as long as the downloads are made available free of charge, please go right ahead.

I do not believe IÃ¢â¬â¢ve ever heard from Diana Hamilton.