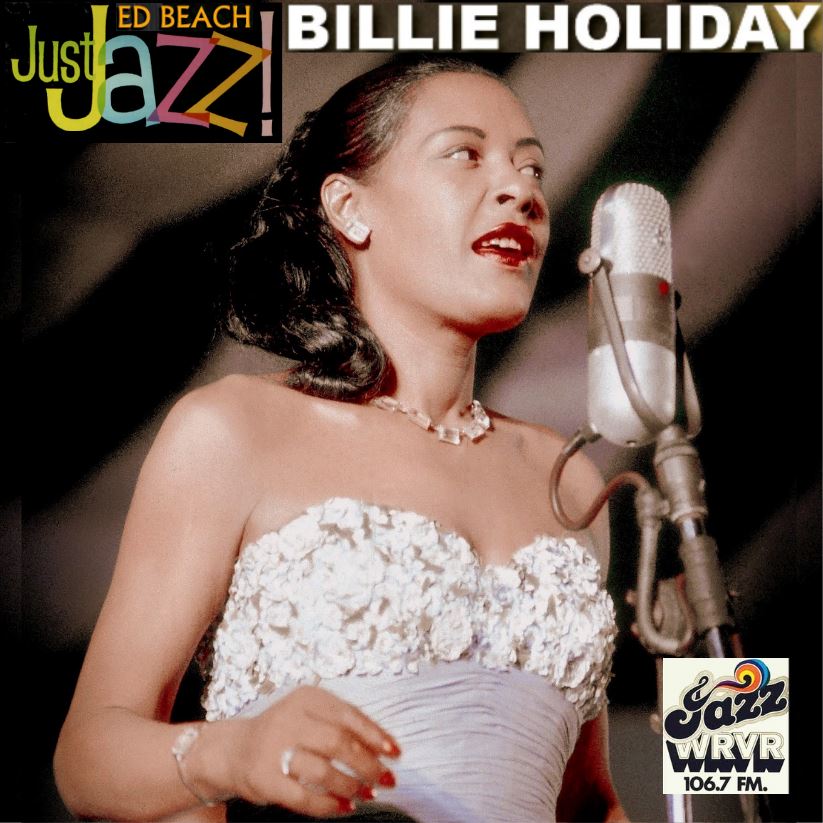 The late great Billie Holiday, aka Lady Day, in multiple recording sessions from 1933-1949. Broadcast on the Just Jazz radio series in 1961 (exact date unknown) on KRVR 106.7 FM ("The River") in New York City, hosted by Ed Beach. Many of Ed Beach's WRVR radio broadcasts are in the Library of Congress, but this historical treasure is not.
As depicted in the 2021 movie, The United States vs. Billie Holiday, the singer was harrassed and arrested multiple times. The Federal Bureau of Narcotics under Harry J. Anslinger had been targeting Holiday since at least 1939, when she started to perform "Strange Fruit". Nonetheless, she continued to perform "Strange Fruit" throughout her singing career, until her untimely death in 1959.
Ed Beach recorded and broadcast over 1000 Just Jazz episodes on WRVR, from 1961 to 1973, and this is currently the oldest broadcast on FM Radio Archive. WRVR-FM was a public radio station owned and operated by The Riverside Church in the New York City that began broadcasting on January 1, 1961, and continued as a commercial radio station from September 1971 until 1976.
Thanks to John Levene (aka Papa John) for sharing this from his collection.
Read more about this Billie Holiday recording here:   https://foursquaremiles.wordpress.com/2018/06/02/wrvr-jazz-ny-weekly-tribute-vol-4/
Read about WRVR-FM and the Riverside Radio Collection here:   https://americanarchive.org/special_collections/wrvr-riverside
Listen to Ed Beach's Just Jazz radio promos here: https://americanarchive.org/catalog/cpb-aacip-528-ww76t0jb8g
Read a 1964 NY Times review of Just Jazz here: https://www.nytimes.com/1964/05/11/archives/radio-just-jazzjustfine-ed-beach-conducts-5hour-wrvr-show-for.html