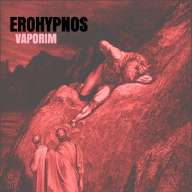 (ENDE112) Erohypnos - Vaporim
Erohypnos is a breakcore producer from London England.
This his first EP, originally self-released earlier this year. Is 7 tracks of fast and heavy amen junglist breakcore. Rather than use the usual predictable ragga loops and bass drops however. He's opted to wrap his patterns in live heavy guitar. Be it drawn out feedback heavy doom riffs, flamenco picking or quieter strumming to create atmosphere.
Still this only really adequately describes the first few tracks.
"Vaporim" is also heavy electronically with thick saw waves sometimes used to drive the track. Throw in a fair amount of sampling, hip hop rhymes, synth, chiptune and abstract sound and you have at times a more melodic and musical approach to breakcore when not just firing rapid change patterns at you.
credits
released November 17, 2015
All tracks by Erohypnos 2015.