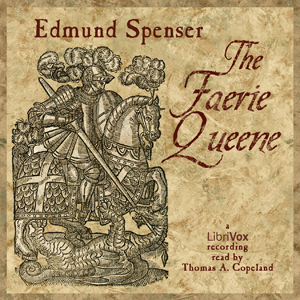 LibriVox recording of The Faerie Queene by Edmund Spenser.
Read in English by Thomas A. Copeland

Spenser planned a 24-book romance-epic consisting of two parts, of which he completed half of the first. The first twelve books were to illustrate the development of virtues within the individual soul, and the second twelve were to depict the application of these moral virtues to remedying evils that afflict the world. Each of the first set of quests was to begin at the court of the Fairy Queen, Gloriana, and the knights were to return thither after having defeated some foe representing a personal weakness. Having thus proved themselves, they were qualified to undertake the second quests, in the world. The neat plan becomes somewhat muddled by Book 3, which nevertheless contains the philosophical core of the poem's allegorical structure: the Platonic notion that love (grace) unifies the cosmos and draws the will, through the pursuit of beauty, into virtuous action, returning to God at last in worship. The plot structure of the poem is rich and complex, with many strands interlinked and overlapping, each replete with allegorical significance. (Summary by Thomas Copeland)

For further information, including links to online text, reader information, RSS feeds, CD cover or other formats (if available), please go to the LibriVox catalog page for this recording.

For more free audio books or to become a volunteer reader, visit LibriVox.org.

Uploaded by librivoxbooks on January 20, 2014