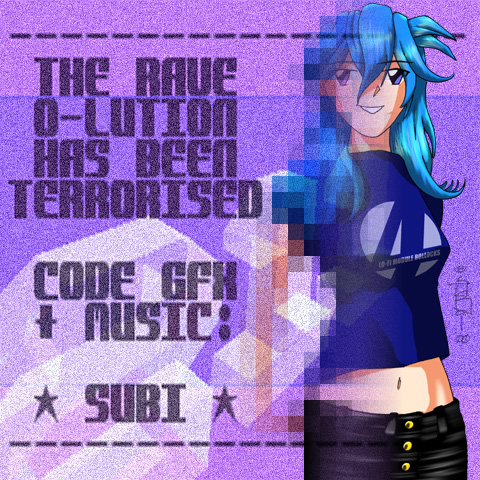 As promised, and as most of you have been dreading/looking forward to, the Subi best-of retrospective has finally arrived.
Throughout his 11 years making music in the Amiga 'demo-scene' and outside, Sam Brown, aka Subi, and formerly known as Subculture, has always shown originality and a doggedness that's characterised his excellent output. The typical Subi release blends cheeky samples, breakbeats, and rampant catchiness to produce something that's pretty much unlike most of the other music out there - and that can only be good.
A veteran fan of the oldskool hardcore/ravescene, Subi, who works as a computer game developer in Manchester, England, has been producing his odes to classic rave/breakbeat with the help of his guitar and battered analog synths, but almost always working on his trusty 4-channel Amiga computer, which is what every single one of these tunes are composed on, amazingly.
So, rejoice in the classic oldskool breakbeat blends, and watch as "The Rave-O-Lution Has Been Terrorised" wends its way through twisted Spice Girls homages and student catastrophe-sampling hardcore tunes as Subi, well, does as only Subi can do :)