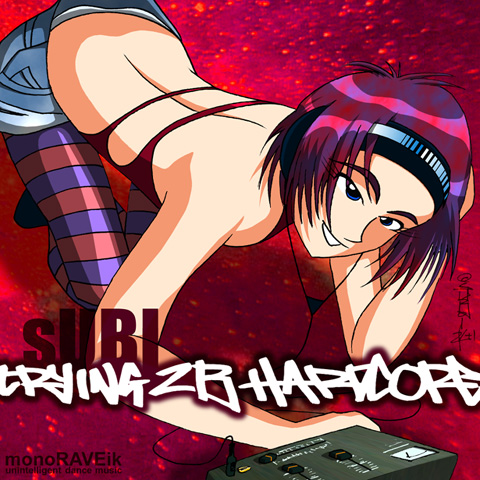 Quite frankly, there is only one person who could possibly open the proceedings of monoRAVEik as a self-propelled entity, and that is the old fart himself. Subi brings it back after nearly a year (was it?) away from the tracker with the nearly understandable title "Trying 2 B Hardcore".
If anyone thought that the cheesemix of "Serendipity City" was representative of Subi's new direction, they are proved wrong by this jet propelled slice of D&B&Rock&Roll. What new direction? ;) Heavy on the distortion and the dynamics, and featuring vocals unwittingly provided by Christina Aguilera and Messrs Highpitch and Lowpitch, this one will have you whistling yet another of those irritating lead-lines for weeks. And quite possibly permanently damage your stereo.
He's finally got total control of monoRAVEik. Do we hear the words "monkey" and "banana plantation" being uttered? Well… we _are_ talking about the man who used to do thrash metal covers of Kylie Minogue songs. No, really.