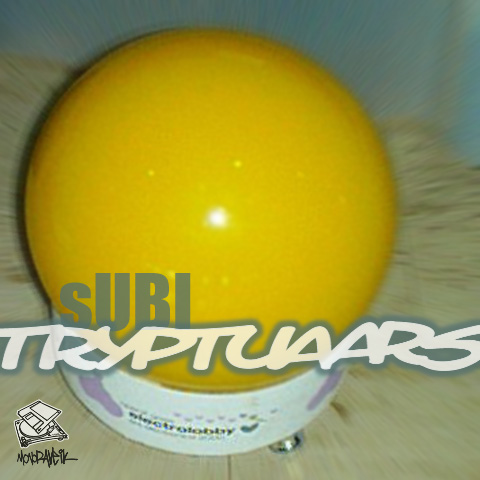 ...bloody hell, what were we drinking last night? Agh. Er. Anyway. It was Subi's birthday yesterday, he is now 365 days from Last Day, and we had a bit of bash over here in monoRAVEik city. Such a bacchanalian assemblage of best bitter and sexual deviancy has not been seen since the days of George IV. And in honour of this august occasion, and because we're all to drunk to track, we're finally releasing the tune Subi did at the Ars Electronica Electrolobby in 2000 (see here for more info). Only two years late. ;)
"Tryptuaars" is a magpie-induced D&B monster which Subi wrote over the week in Austria inbetween being interviewed by Kim Danders, the host of Electrolobby and very nice man who unwittingly supplied the vocals for this track (taken from the first interview). The "no" was originally supposed to have been a composite of all the people on #tpolm sampling themselves saying it and emailing it to Subi, but he forgot to ask them in time. The rest of the samples are culled from various free sample sites, and a few of Subi's previous tracks. All this was to prove how the concept of open-source music (the point of Subi and Distance's presence at Electrolobby) worked. In the interests of open-source music, we are also making the tune available in its original .XM format.
The title is not an excruciating pun on "A Trip to Mars", but a reference to the Crystal-Silents-Anarchy party held in Aars about ten years ago, as the demoscene was also on display as an example of proto net-culture. "A Trip to Aars" was the subtitle of the post-party demo from Melon Dezign, so it's their excruciating pun.
The cover shows one of the few bad points about Electrolobby, the chairs. Yep, you were actually supposed to sit for eight hours a day on a wheeled Spacehopper. According to h0l they were still being used in 2001 when he went. Backache all round. Mind you, they made good footballs.