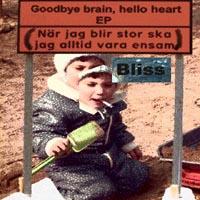 We're absolutely delighted to put out a third release from Swedish electronic artist Bliss, aka Henrik Jose, over a year after his well-received 'It's Not The Sweetness...' EP. Since then, he's collaborated with music video directors Pleix (Basement Jaxx, Plaid, Futureshock) on an experimental video, while continuing to work on new material, but shines out his late 2003 vintage in 'Goodbye Brain, Hello Heart EP', a shimmering block of entirely instrumental sound produced in his Lund studio with a glorious melange of live instruments and synthesizers.

Thus, eschewing the vocals that sometimes characterize the Bliss-ful sound, 'You Have Something In Your Scowl' shows a more contemplative side, almost supernaturally languid in its sound submerging, before we slide into 'Things Will Eventually Make Sense' and the beautiful drums mix into the complex melodies, as things start to crystallize. And, indeed, they're fully crystallized by 'Time Time Time', the final track, which builds up an almost robotic Spiritualized, only with the Church Of Robot Wisdom substituted for gospel influences, and Chapterhouse switched in for long-dead bluesmen.And we greet the heart, and the brain recedes, and the curtain falls. Amen.

1 - You Have Something In Your Scowl

But this is something entirely different- and what a beautiful thing it is. Play this song and in just a few minutes (3:28 to be precise) another tiny sliver of the infinite majesty of the universe will become apparent to you.

Bliss, who is undoubtedly true to his name, graduates with highest honors ; )

In the meanwhile, I have this.
Oh, and this:
http://explodingdog.com/drawonpaper/06152005/images/0024.jpg
Reviewer: mrk087 - favoritefavoritefavoritefavoritefavorite - December 26, 2006
Subject: Most beautiful album ive heard.
Every track is magnificent in its own way, and they each flow into each other flawlessly, making it sound like one long, beautiful song.

5/5
Reviewer: purusha - favoritefavoritefavoritefavorite - October 27, 2004
Subject: expected something else
excited by the beauty i found in pieces like "life on the rooftop", "transportation is bliss" or "it's not the sweetness..", which as far as i am concerned deserve 5+ stars, i immediately downloaded this new EP by bliss. the music is very good but i couldnt experience the beautiful trip i got used to; the tracks remind much of ulrich schnauss but do not give anything more than the latter. time time time is a nice piece of mellow electronics, but i'd get back to the older bliss when i felt like listening to some of this genre.