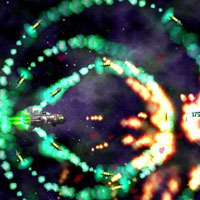 Oh my. Ever since we at Monotonik heard Swedish bleep-metal group Machinae Supremacy cover Chris Huelsbeck's classic 'Great Giana Sisters' theme in heart-rendingly wonderful .SID chiptune vs. Spinal Tap style, we've been major, major fans. So, after the group completed the soundtrack to (extremely fun) PC indie shoot-em-up Jets 'N Guns (http://jng.rakeingrass.com/), and made the entire higher-bitrate quality OST available to fans on their official homepage (http://www.machinaesupremacy.com/), we plucked up a little courage and asked them if we could release it on Monotonik, too.

And guess what? They said yes, and we whooped a lot and drank a celebratory ginger beer. And as a direct result of this, we proudly present the full 28 track masterpiece from Robert Stjärnström, Andreas 'Gordon' Gerdin, Kahl Hellmer, Jonas 'Jonne' Rörling, and Tomas Nilsén that is 'Jets 'N Guns', the official game soundtrack. But where to start? Well, a notable statement of intent is 'Theme from 'Jets 'N Guns', of course, which is straightahead, insanely catchy rock theme nirvana, almost as if Taito's Zuntata had moved to Scandinavia at some undetermined time

But from there, it gets all twisty. 'Megascorcher' twins the SID-style bleep with some insane riffing, and 'Archangels of Sidaroth' is some unholy melange of doom-like sludge guitar chords and pure chiptune goodness. 'Kings Of The Sea', evidently for a water-y game level, brings on the floating and the echo-y ambience, and it goes onward and upward all the way to the absolutely majestic 'Endgame', which floats on the waves of sines and glory. Thanks again to Machinae Supremacy for the chance to get this amazing soundtrack out to more people - if you dig it, buy the game, grab Machinae Supremacy's first stand-alone album, 'Deus Ex Machinae', or just mosh happily with your fingers making arcane devilish soundchip symbols, like we do. 'Nuff said.

6 - Flight of The Toyota

Reviewer: tastefulasever - favoritefavoritefavoritefavorite - May 7, 2009
Subject: Cliche.. Maybe
But certainly not tasteless. If it is full of cliches, they are well composed and executed. I've listened to this soundtrack three times in the last year and have found it to be enjoyable on all three occasions. Recommend for anyone that thinks they would enjoy operatic metal with electronic instrumentation providing most of the melody.

Reviewer: YAWN - favorite - February 9, 2008
Subject: Quite disappointed too
As it's apparently the monotonik release that gets most listens, A expected some great electro, but it's actually a rather tasteless blend of electro and metal clichés.

Reviewer: Bruns_Golie - favoritefavorite - April 27, 2007
Subject: Go Mighty-Fuckin-Power Rangers!!
I never understood how some people waste their talents writing music that is so predictable, unoriginal, boring and pointless. A for effort, though.

If anyone out there is a fan of progressive rock music and loves classic videogame sounds, do NOT HESITATE on THIS ONE. Download now, you will not regret it.

Thanks for submitting this, it was a pleasure to listen through all the way.