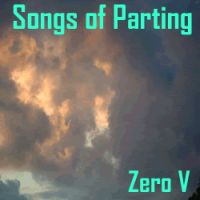 Zero V's new solo album, his debut release for his ON-Mix productions label. Zero V set aside a few months to write and record the album. He has created a collection of songs that take you on a journey. The compositions were crafted from improvisational sessions in his studio.
Working entirely alone Zero V has created an emotional raw, minimal work of excitement and dark beauty. Although there are elements in his previous body of work that hint at the direction taken here the CD, entitled 'Songs of Parting', appears to cover new ground in style, content and intensity of emotions.

This album was recorded in the months of March, April, May and June of 2005. All aspects of the recording were handled by Zero V himself.

I will have an interview with Zero V at his "Garage Studio" at his place, I must say that I am very excited while parking my car on the driveway in front of his house/studio.

Zero V opens the door and welcomes me, he kisses me three times on my cheeks, an old Dutch custom he says with a big smile. Man what is this guy relaxed and laidback, much different than during his live stage performances, I can tell you that!

He pours me a cup of coffee, and he asks "do you wanna start this interview now? I will show you the rest of the house and the studio later on.". Okay! I said, let's begin.

What is your musical background? What did you do, are you playing any instruments for instance?

From the classical pieces of music I had to play on my guitar I made a shift to something completely different. I threw the guitar in the corner and started experimenting with tape loops, dictaphones, sampler, keyboards, etc. Most of it together with Mr. DeVo!

What kind of guy are you?

Haha, yeah you should really ask someone else this question, but if you insist, I'm an open minded, positive guy and I enjoy life very much.

I hope I'm fun to have around. I kinda have a 'dry' sense of humour.

What did you do the last 10 years, was it only music stuff or other things as well?

The last 10 years I have been busy working. During this period I finished my study (Erasmus University), started a new business. Actually first time I left an employer to start a business of my own, I ran into Ekim. I have been lucky to be able to work in places all over the world.

I never stopped making music, but the intensity was gone during this period. It was also a time of discovering who I really am. Had my ups and downs, built my own house, I have 2 lovely daughters whom I have turned into die hard Duranies.

What is you purpose in life?

Oh, that's easy, I like to be loved, trusted and respected by other people and give it back as well, and help those that need it.

I hope that a lot of musicians/DJ's/producers/remixers/songwriters, etc. will join us and use the ON-Mix initiative as their platform.

What kinda mixing tools and programms do you use/prefer?

Do you have a couple of minutes!....I use various tools like, Steinberg Cubase SX 3, Adobe Audition, Rebirth, Retro AS, a whole bunch of VST/VSTi/DXI plugins/instruments, Hyperprism (Like 'm a lot), Izotope (which created the sound of a record scratch on the intro of my Triple 10 version), Ableton Live 4, Cakewalk Homestudio 2 XL, Pro Tools and last but not least magix Music Maker.

Anything from classical music to pop to jazz to punk to whatever, so as you can see a wide range of musical interests and influences.

Who are your musical favourites?

I like Pace de Lucia, Duran Duran (can't help it, it's my weak spot!), David Sylvian, Can, Future Sound of London, 808 State, Junkie XL, Miles Davis (absolute hero of mine)

I saw on the ON-Mix website that you are currently working on a new album. Can you tell us a bit more about this?

Sure, I assume you mean 'Songs of Parting'?

It will be an entirely instrumental album. I went, more or less, back to the days of S.N.E.E.K. and Boy In Trouble. Using all kinds of music and sound fragments, tweaked most of them to create an atmosphere of moving, travelling, going somewhere. Although it's instrumental, it's not entirely made on the computer. I actually used an old dictaphone and some acoustic instruments (guitar, flute, percussion) which I recorded on my hard-disc and sampled, tweaked, etc. where necessary.

Wow! time flies when you're having fun.

Thanks for the interview and I will see you soon during one of your live sets in the near future.