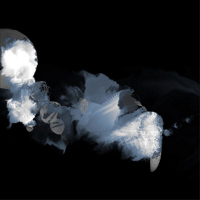 Escape Now!'s music went more and more
microscopic in the years after 2003.
Starting from the IDM electronica point
he eventually arrived in the ambient domain.
Lichtung is a fifty minutes laid back
microscope universe, visualizing this path.
Please do not wonder, the release will be
published as catalogue number 100, that was
not set until now. A festive compilation
was thought to go with this number but this
was not realized so far, so let's party and
compile later, maybe with the 150 or 200 : )
www.phonocake.org/lichtung