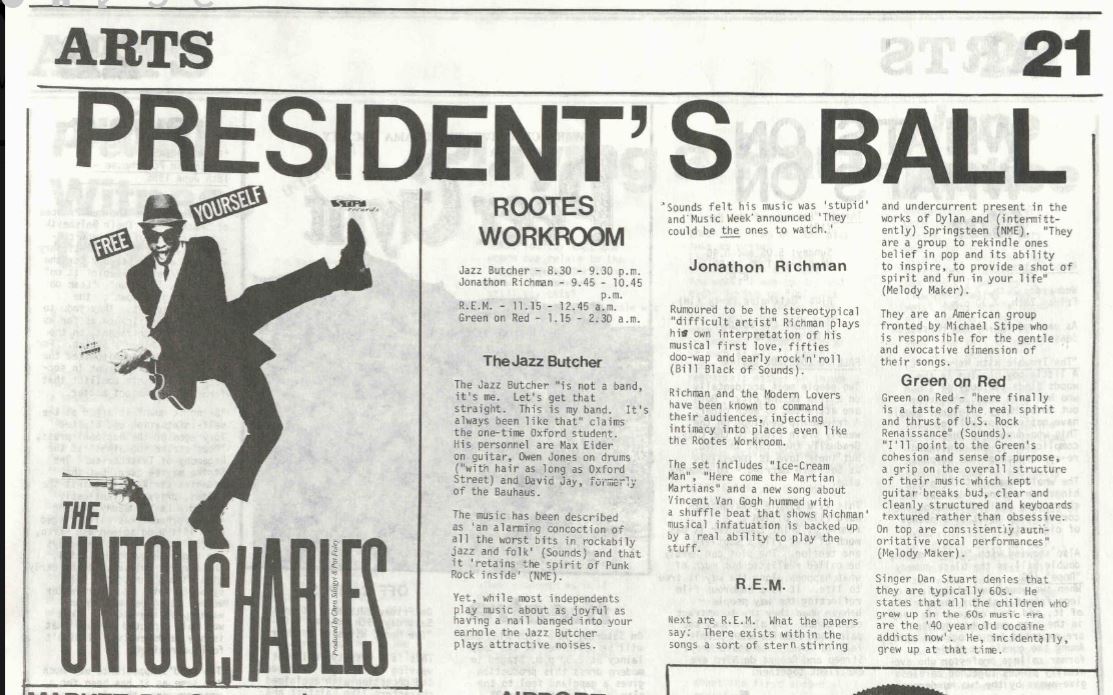 R.E.M.
Workroom, Rootes Hall, The University Of Warwick, Coventry, England
Thursday 27 June 1985
support: The Jazz Butcher, Jonathan Richman
supporting: Green On Red
Originally seeded on Dime in December 2006. Reseeded by eckythump December 2019.
Original lineage information: low gen tape (thanks Tim)>Audition 1.5>wav>flacfrontend 1.7.1
Disc 1
01. Feeling Gravitys Pull
02. Second Guessing
03. Green Grow The Rushes
04. Laughing
05. Maps And Legends
06. So. Central Rain (I'm Sorry)
07. Have You Ever Seen The Rain? (Creedence Clearwater Revival cover)
08. Driver 8
09. Can't Get There From Here
10. (Don't Go Back To) Rockville
11. Hyena
12. 1,000,000
13. Old Man Kensey
14. Just A Touch
15. Auctioneer (Another Engine)
16. Pretty Persuasion
Disc 2
encore 1:
01. Someone's In The Kitchen With Dinah-Jimmy Crack Corn-Behind Closed Doors (brief medley)
02. Harborcoat
03. California Dreamin' (The Mamas and the Papas cover)
04. Mystery To Me
encore 2:
05. Barney Miller Theme
06. Theme From Two Steps Onward
07. We Walk
08. Little America
Michael Stipe - Vocals, harmonica
Peter Buck - Guitar
Mike Mills - Bass, vocals
Bill Berry - Drums, vocals
Show notes: While R.E.M. were making huge inroads in their home country and playing theatres that held thousands, over in Europe things were progressing more slowly. A week before this show the band supported U2 at Milton Keynes, and as legend has it had to dodge bottles full or urine hurled at them while performing. While they weren't quite ready to headline large venues in Europe yet, this show at the University of Warwick (this performance was part of the Presidents Ball) shows the band had acquired a small but dedicated bunch of UK fans, who were relentless in their song requests between songs, and even requesting some very obscure songs, suggesting they had been listening to many live shows even at this point. Case in point, an audience member who continually yelled out for the rare unreleased 'Mystery To Me' early on was rewarded with the band playing it for the only time that year during the encore, and in fact would be the last time they ever performed this song live. 'California Dreamin' was also a request, as announced by Michael. Other requests, such as 'See No Evil' were ignored, despite the song being regularly played that year.
This is a really fun show to listen to, with some great banter between band and audience. The band Green On Red, who followed them on this evening had a very tough act to follow. While I'm unaware of a recording of it in existence, never one to turn down a chance to play on stage, Peter Buck guested with Green On Red on guitar on 'Sympathy For The Devil' during their set after R.E.M. were done.
Torrent notes: I downloaded this from Dime back in 2006, and it's another show I've never seen reseeded. While the taper is unknown, the original torrent notes said "this was taped by the same guy that did the other British shows that I upped last year as part of the 20th Anniversary". The sound quality is excellent, nice and clear, and while the audience is rowdy between songs, during the performance they are quiet. The band/audience dynamic is captured really well here. If you haven't heard this before this is an excellent addition to your R.E.M. collection. The original torrent did not include an md5 or ffp file, so I have added them. I also added an article I found online from 'The Boar', the student newspaper of the university from the day before promoting the show. The recording itself has been untouched.
Many thanks to the taper who captured this amazing piece of history, and the original uploader. Enjoy!
http://www.remtimeline.com for all your setlist needs!