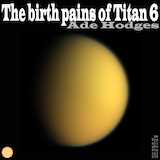 "The birth pains of Titan 6 (waag_rel039)" is the soundtrack to a story that has yet to be told about the ill-fated sixth colony on Titan.

It also marks the solo debut on weareallghosts of a man steeped in both ambient music and pulp science fiction - Ade Hodges.

I've had this album for a wee while and have really enjoyed the themes it presents ... Ade has gone out his way to create an album that could easily be the soundtrack to a cult sci-fi film ... something dark and unsettling.

I particularly like the photo he asked me to use for the cover ... it is a natural colour composite of Titan that was taken during the Cassini spacecraft's April 16, 2005, flyby. According to the Wiki page, it is a combination of images taken through three filters that are sensitive to red, green and violet light.

I am proud to welcome Ade in his own right to weareallghosts and look forward to the future.

An MP3 version of this album is available for free on Archive or a lossless version available on Bandcamp for 'pay what you want' which does include £0 ... and remember, paying supporters on Bandcamp also get unlimited mobile access to the album using the free Bandcamp listening app.

If you do decide to download this album for free then all we ask in return is that you tell your friends, tweet a link or post it on Facebook, write a review and spread the word.

we are all ghosts
Netlabels

Uploaded by thomasmathie on January 5, 2014