What is Property? An Inquiry into the Principle of Right and of Government 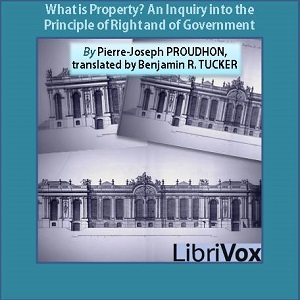 What is Property? An Inquiry into the Principle of Right and of Government

LibriVox recording of What is Property? An Inquiry into the Principle of Right and of Government by Pierre-Joseph Proudhon. Translated by Benjamin R. Tucker.

What Is Property?: or, An Inquiry into the Principle of Right and of Government (French: Qu'est-ce que la propriété ? ou Recherche sur le principe du Droit et du Gouvernment) is an influential work of nonfiction on the concept of property and its relation to anarchist philosophy by the French anarchist and mutualist Pierre-Joseph Proudhon, first published in 1840. In the book, Proudhon most famously declared that “property is theft”. Proudhon believed that the common conception of property conflated two distinct components which, once identified, demonstrated the difference between property used to further tyranny and property used to protect liberty. He argued that the result of an individual's labor which is currently occupied or used is a legitimate form of property. Thus, he opposed unused land being regarded as property, believing that land can only be rightfully possessed by use or occupation (which he called "possession"). As an extension of his belief that legitimate property (possession) was the result of labor and occupation, he argued against such institutions as interest on loans and rent.

For further information, including links to online text, reader information, RSS feeds, CD cover or other formats (if available), please go to the LibriVox catalog page for this recording.

For more free audio books or to become a volunteer reader, visit LibriVox.org.

Uploaded by librivoxbooks on December 18, 2013